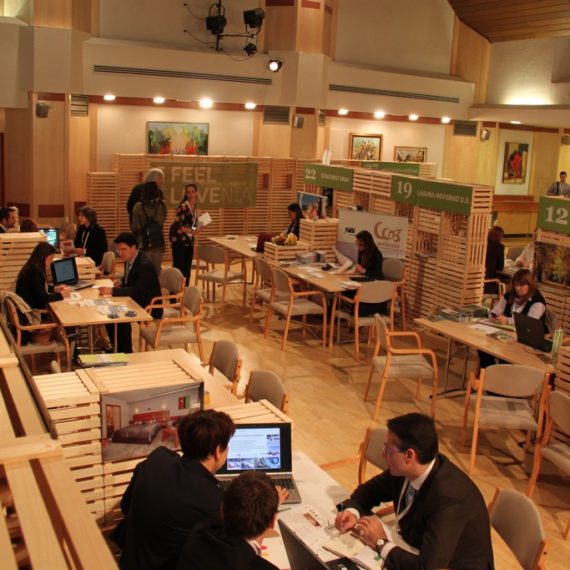 With the strong support of Slovenian, Slovakian, Hungarian and Serbian spa and wellness association, SPA-CE was becoming widely recognized throughout the Central European region and each year more providers and buyers of spa and wellness services were interested in being a part of this yearly trade show. Kosjenka Spremić from Istraturist Umag d.d., Croatia explained: “We think that the trade show SPA-CE has a great concept, and is one of the most important and valued wellness-themed shows in the region, if not in the whole Europe.”

Mojca Matko from Terme Maribor, Slovenia emphasized: “It’s important to be presented in the market all the time, to get new partners and to meet old business partners.”

Maja Jahn from Thermana Laško, Slovenia added: “Being a part of SPA-CE brings many positive effects which all lead to the same goal: growth of the demand for spa and wellness services from foreign markets.”

The Spa and Wellness offer presented at the 4th trade show was very diverse. The largest proportion of exhibitors came from Slovenia, followed by key representatives of spa and wellness services from Croatia. Organizers were happy to see strong suppliers from Slovakia and Hungary joining the show. Nagy Anikó from Danubius Hotels Group from Hungary commented: “This trade show is a unique possibility for us to meet medical and wellness services providers, potential buyers and suppliers of Central European spas. SPA-CE was the meeting point of the Central European Spa Business for two days!”

SPA-CE has also attracted serious buyers of spa and wellness services from all around the world. The trade show was enriched by an opening conference programme and the informative study trips to Slovenian and Istrian spas organized for hosted buyers.

Damjan Pintar from Unior d.d. Program Turizem (Terme Zreče), the host, said: “As the majority of other providers of tourism services, we are also keen supporters of such events, as they represent an excellent opportunity for showing potential partners and buyers everything we have to offer. We are more than pleased to have hosted the SPA-CE event and welcomed the participants at the new hotel that was inspired by the story of an apple. We dearly hope that SPA-CE met the expectations of everybody involved, thus the organisers, hosts and, in particular, the participants.”